A Philosopher, a Franciscan and a Physician in Conversation: Alumni of the Collège du Cardinal Lemoine

University of Cambridge
cl708 (at) cam.ac.uk 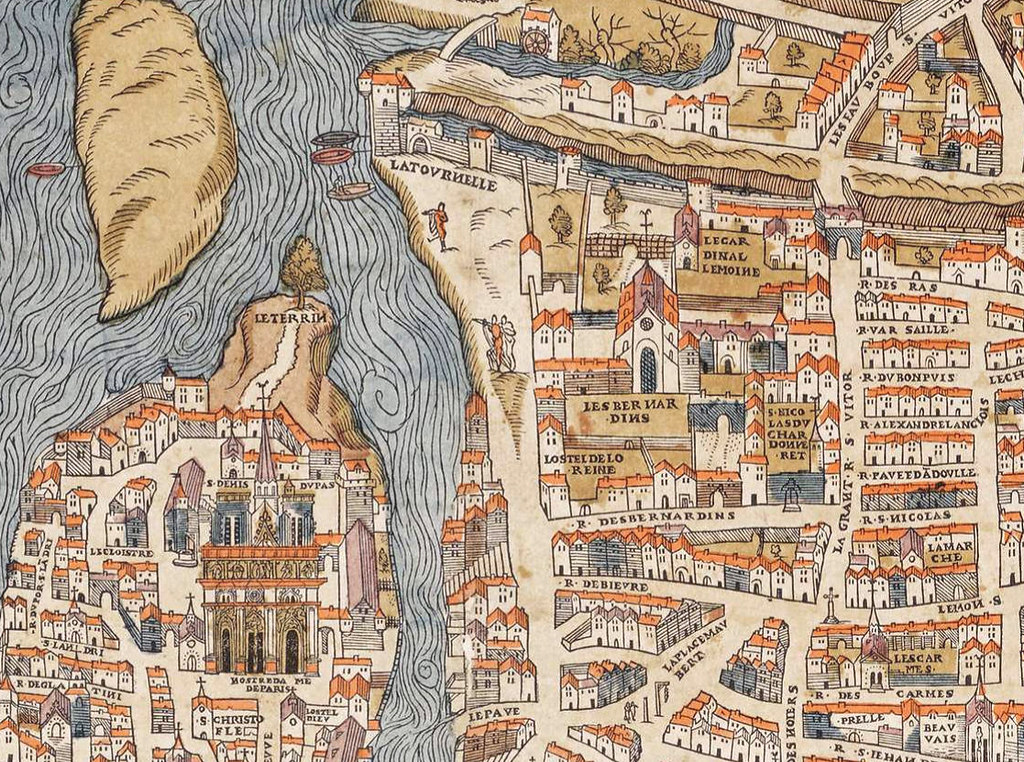 Caption: No building from the Collège du Cardinal Lemoine in Paris survives today, but this map from the sixteenth century shows its location on the left bank, next to a Bernardine monastery. Detail from Map of Paris by O. Truschet et G. Hoyau, ca. 1550.

In December 1513, the philosopher and mathematician Charles de Bovelles (1479-1567) wrote a two-part discourse on how angels relate to space. He sent it in two separate letters addressed to two men, a Franciscan monk and a physician, both residents of Lyon, and both friends of Bovelles. It must have been convenient to dispatch both of the letters to the Franciscan Convent of St. Bonaventure, and we might conjecture that this is where the two men met to read together. Only so could they piece together Bovelles' argument: that angels have nothing to do with space or place – that their presence and 'plenitude' refers to the abundance of their exuberant substance.

The idea that friendships – in particular, those between intellectuals – overcome spatial division is frequent in Bovelles' letters. However, it not this argument which will concern us here, but rather what our specific constellation of correspondents tells us about intellectual life in sixteenth-century France. I will provide the key right away: Charles de Bovelles, Jean Labin and Léonard Pomar were all connected through the Collège du Cardinal Lemoine in Paris. Bovelles had studied there under the supervision of Jacques Lefèvre d'Étaples in 1495-ca. 1500, and then taught the masters' course for a couple of years. Before joining the Franciscan order in 1513, Jean Labin had also had the opportunity to study with Lefèvre, as had Léonard Pomar, though the latter had then moved on to study medicine in Avignon around 1495 (Rice 1972, 94–97).

The survival of correspondence between alumni of the college invites us to think about a relatively neglected aspect of the history of universities in this period, namely the existence and role of alumni networks, and how they reflect on the cultural significance of the arts program in the late middle ages. Such inquiries necessarily involve incredibly obscure historical actors. Nothing is known about our Franciscan Jean Labin, apart from what Bovelles' published correspondence reveals. However, piecing together what we can of this story allows us to get a glimpse of what it meant, in the early sixteenth century, to be an alumnus of the arts program, and specifically of the Collège du Cardinal Lemoine.

When the Cardinal Jean Lemoine himself founded the College in 1302, his principal aim was to support needy students from the northern region of Picardy in their studies at the University of Paris. Two centuries later, it had developed into an institution with its distinct flavour. It did no longer reserve bursaries for disadvantaged students – Bovelles had benefitted from one despite being the son of a land-owning lord in Picardy – and the College began to admit a large number of private students (Brockliss 1978, 535–36; Gorochov 1991). However, students of all ages still shared the college buildings, meals, and chapel services. Towards the end of the fifteenth century, the BA in philosophy was increasingly taught in college, rather than in the Faculty, which can only have contributed to the intensification of communal life within the College (Gorochov 1991).

This last development is especially important for understanding Collège du Cardinal Lemoine in the early sixteenth century, as it devoted extraordinary efforts to developing new educational strategies. Jacques Lefèvre d'Étaples joined the team in 1494 and was especially active in producing new Aristotelian textbooks inspired by Italian humanist practices, as well as importing new texts and influences into the philosophy course. However, other teachers and directors at the College seem to have been supportive of these projects, and it seems that the College as a whole shared the objective of reforming the philosophy course. Books published by teachers of this college in the first decade of the sixteenth-century reveal a tightly knit academic culture in Paris at the time, which did not only involve a narrow circle of Lefèvre's collaborators and students but other teachers of the college.

This academic culture is eminently visible in the book dedications of early French humanists. Eugene Rice has pointed out that this group tended to dedicate their books to each other, rather than to patrons (Rice 1971). Works produced at the Cardinale Lemoine exemplify this general trend. The Lyonnais physician Léonard Pomar, to give one example, was the recipient of the dedication of the first independent work of Charles de Bovelles, his Art of Opposites (1501). Book dedications often emphasised the friendship between colleagues and their mutual love for learning. Richard Oosterhoff has argued that the theme of friendship, beyond constituting a 'social currency' also was fundamental to how intellectuals in the circle of Lefèvre regarded their subjects. Philosophy and mathematics were thought to be pursuits that took their beginning in a search for harmony or concord (Oosterhoff 2016, 566). The collegial community at the Cardinal Lemoine involved educational teamwork, shared enthusiasm for putting their work in print, and the idea that learning was a pursuit for friends.

What the correspondence of Bovelles shows us, is that such networks did not have to end with ones' departure from Paris. Whether one moved to study law in Bologna or medicine in Avignon, to enter a monastery in Engelsberg or Lyon, it was possible to remain involved through letters. Ann-Hélène Klinger-Dollé has said it well, that letters were both 'preuve et nourriture principale de l'amitié entre fabristes' (Klinger-Dollé 2016, 79). Reading through collections of letters, one finds friendships in multiple directions, between nodes found North and South of Paris, in a network without a centre. It connected remaining arts teachers with physicians, clergy and administrators. In their correspondence, they continued to celebrate their shared experience, sometimes allowing us a glimpse into memories from the classroom.

While certain correspondents might have nourished authorial ambitions of their own - this is undoubtedly the case with Alain de Varennes - this is not the case with all involved. As Oosterhoff argued about declarations of friendship in dedications of mathematical works, it is not the case that one can reduce the exchange of friendly letters to expressions of ambition. Instead, we must take seriously the lingering interest of some alumni in a community based on the mutual love of philosophy. Apart from Jean Labin and Léonard Pomar, the Fabrist community in Lyon also included the productive physician-philosopher Symphorien Champier who had studied with Lefèvre, and a second Franciscan named Jean Lagrene, who had studied and taught at Cardinal Lemoine.

Perhaps the most fascinating aspect of this story is how it shows interactions between professional groups that led very different lives. In the case that we found in Bovelles' correspondence, it was a Franciscan monk and a physician. It is not only abstractly, in the curriculum, that the 'philosophy' course provided common ground for physicians and clergymen. One section of the amorphous intellectual community of early sixteenth century France consisted of alumni of the philosophy course in some particular college. They were not only correspondents with prolific philosophical authors, and buyers and readers of their books, but also with each other.