Seymour on Bizzocchi, 'A Lady's Man: The Cicisbei, Private Morals and National Identity in Italy' 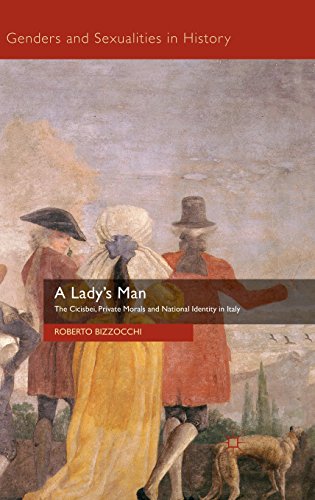 Let us throw common wisdom about judging books to the wind and begin with the cover (http://www.palgrave.com/page/detail/a-ladys-man-roberto-bizzocchi/?isb=9781137450920): a beguiling image by Giandomenico Tiepolo centers on an elegant lady in a long yellow dress, viewed entirely from behind. She is supported at each elbow by gentlemen in frock coats and knee breeches. The intimate trio are just embarking on a promenade, and one of the men throws back an ambiguous glance. Painted shortly after the French Revolution, the image poignantly captures not just the courtly formality of the age, but the intriguing social custom that forms this book’s subject. Cicisbei were fully sanctioned male companions of other men’s wives in eighteenth-century Italy. So exclusively couple-based have Western notions of marriage since become that it is difficult to translate the bonds between married women and their cicisbei into modern terms. But as we move beyond the book’s cover, we find that these relationships were close and enduring, often involving love, and more than likely in some cases, eroticism.

Explaining the relationships between cicisbeo, wife, and husband, and placing them in their historical context, is the complex challenge that Roberto Bizzocchi has set himself in a book that is both entrancing and difficult. The work’s appeal lies in the fascinating nature of its subject, and its strengths derive from its depth as a work of cultural history. The author deploys an impressive array of sources, including poetry, works of literature and theater, paintings, and other iconography, even images of furniture. Most importantly, Bizzocchi also uses many first-person sources such as diaries and letters. He reads these, often between the lines, in ways that display great philological skill and sensitivity of historical judgment. On the other hand, the main weaknesses of the volume, which was first published in Italian in 2008, lie in the fact that the challenges of translating the prose of another language and the academic style of another culture have not been well met. Translating academic work is a difficult and expensive business, so we are fortunate that this complex, interesting work has been made available in English, and it would be a shame to discourage future ventures. However, it would be wrong to turn a blind eye to the broader issue when translation causes problems, as it does in this case. While Italian academics may prize linguistic nuance and complexity over straightforward clarity, much Anglophone academic culture has moved the other way. Faith to the original may have been the watchword of this translation, but it has resulted in sentences that are often incomprehensibly long or contorted--exasperated counts revealed over 130 words in one sentence, and over 150 in another. The lack of concern for clarity results in a book that is less alluring than it deserves to be. This is unfortunate since there is much to be learned from this study of the intimate morals of a bygone age.

A Lady’s Man’s context comprises the city-states, principalities, and kingdoms of eighteenth-century Italy, with a chronological focus on the few decades before those polities began to give way, first, to the forces of the French Revolution, and then, after the Restoration of 1815, to nascent Italian nationalism. Bizzocchi’s setting is the Italian world of the Counterreformation and the Grand Tour: resplendent, decadent, and politically weak. The word cicisbeo, coined in the aristocratic milieux of this world’s ruling classes, described an escort who lived “side by side with another man’s wife as part of an arranged and desirable triangle” (p. 1). The term is familiar to historians of Italy thanks to the Swiss Calvinist Simonde de Sismondi, who, writing in the early 1800s, placed much of the blame for Italian society’s contemporary decadence on cicisbeism (p. 11). Sismondi’s work turned the custom into a byword for the lax private morals of Italian aristocrats, and cicisbeism soon fell into disrepute, giving way to the more rigorous models of marriage favored by bourgeois nationalists. Bizzocchi’s aim is not so much to redeem cicisbeism from its ill repute, but to look beneath its reputation as an emblem of corrupt frivolity, finding a marital custom that was appropriate to the prevailing culture and social structure.

The book makes this analysis persuasively. The second of six chapters links the emergence of cicisbeism to radical changes in Italian aristocratic social life wrought by the Enlightenment. Comparatively quickly, women found themselves at the center of a newly public sphere, becoming the arbiters of civility and politesse in a new culture of social engagement that involved men and women far more equally than before. Noblewomen emerged from lives that had been relatively hermetic, and this new state of affairs entailed new attitudes to controlling wives’ sexuality, and husbands’ potential jealousy. Essentially, Bizzocchi argues, the cicisbeo fitted into this “enlightened cultural plan” (p. 23) in the role of guardian. His presence at the side of a woman engaged in public life demonstrated that she was part of a “network of masculine protection” (p. 33) on the frequent occasions when a husband could not or did not want to be present. The cicisbeo represented a compromise between the freedom brought to women by Enlightenment social culture, and the control represented by channeling this freedom within formal, predictable limits. Particularly useful here is Bizzocchi’s treatment of the Catholic Church’s position. On subtle matters such as the difference between church doctrine and quotidian priestly practice, Bizzocchi shifts the scale of observation from one to the other with convincing ease. Formally, the church railed against cicisbeism, but church officials played an integral part in aristocratic society. Using personal accounts, the book shows how the church’s human representatives became more tolerant, and ultimately, even instructions to confessors shifted to accommodate the new social realities.

Chapter 3 examines the ways cicisbeism complemented aristocratic exigencies of the time, explaining the phenomenon in strategic terms. The poet Ugo Foscolo condemned it as part of an aristocratic strategy to limit marriages and avoid the dispersal of fortunes. Bizzocchi concurs, adding that cicisbeism coincided with high rates of aristocratic bachelordom in the eighteenth century. This resulted in a “vast market of men” unhindered by matrimony, making cicisbeism possible and desirable, even a type of social apprenticeship for young bachelors (p. 63 and p. 70). Moreover, since aristocratic marriages were arranged to reinforce family alliances and fortunes, Bizzocchi proposes that cicisbei can be seen as fulfilling emotional needs that might not otherwise be catered to. His analyses of the personal correspondence between wives, cicisbei, and husbands support his argument and provide fascinating insights into the writers’ emotional lives. In short, the custom fitted into a particular social, familial, and marital economy: cicisbeism “contributed to family solidarity and balance among the ruling classes” (p. 87). The following chapter, on the custom’s “geopolitics,” makes extensive use of diplomatic documents, mostly French and British, to show how much social practices interested representatives of foreign governments. The chapter also considers how the custom varied across the length of the Italian peninsula, emphasizing the influence of different types of political regimes. Bizzocchi finds that cicisbeism was stronger in smaller states with tight-knit, provincial ruling classes where reciprocal networks were strong (such as Venice, Genoa,  Lucca, and Florence), and weaker in states where there was a strong princely court (such as Turin and Rome). For the South (from Naples to Sicily), Bizzocchi rues a relative lack of first-person sources, wondering whether that reflects a lower incidence of the practice. He finds that literary and iconographic sources allow, “with prudence,” the conclusion that the custom was also known in the South.

Chapter 5, on the erotic implications of cicisbeism, must have been the most difficult to research, and may also be of most interest to readers of H-Sexuality, but those expecting anything salacious will be disappointed. Instead we find a careful and measured assessment of first-person sources, contextualized among the varied schools of contemporary opinion. These range from the many who saw the custom as chaste, to Catholic moralists in particular, who thought they were anything but. What the diaries and letters of the age make very clear is that these relationships were often suffused with intense emotions, and in examples of outbursts of jealousy, the author reads erotic significance. He does this without overtaxing the sources, concluding circumspectly that sex between cicisbei and the women they “protected” probably took place more often than the doubters thought, but less than the moralists feared (p. 181). The chapter moves to more general considerations on the sexual mores of aristocrats of the age, conditioned as they were by concerns about reproducing heirs, protecting blood lines, and saving them from extinction. Bizzocchi does not rule out the possibility raised by contemporary observers that sometimes cicisbei might help produce an heir and thus prevent the extinction of a family (p. 213), but evidence that goes beyond the anecdotal is very difficult to find.

Until the concluding chapter, the book’s argument about the relationship between cicisbei and national identity in Italy is really only incipient, linked to the fact that outsiders (such as Sismondi) largely perceived cicisbeism as a negative feature of a national identity that had yet to come into being. The final chapter’s opening skilfully utilizes the marriage of Alessandro Manzoni, the writer who best embodied Italian Romanticism and nascent nationalism, to foreshadow the end of cicisbeism. Manzoni’s own aristocratic parents fully utilized the flexibility of eighteenth-century morality, but Manzoni’s marriage, which began in 1808, evinced the stability and commitment that would become ideal qualities of matrimony by the later nineteenth century. Bizzocchi argues that Manzoni embodies a more general move by Italian aristocrats, in the new climate of Romanticism and nationalism, to distance themselves from the triangular model of marriage in favor of an “ideological adherence to the choice of binding marriage as the natural condition” for human fulfillment (p. 220). As the movement to unify Italy into a nation gathered momentum from the 1820s, its protagonists made cicisbeism a target of patriotic ideology. Condemning the practice became an instrument for demarcating genders in Italy more clearly, casting women as faithful and innocent and encouraging men, emasculated by the frivolities of their gallant pursuits, to restore their virility.

This is an interesting argument, sketched, rather than fully developed, in the final few pages of the book. The closing lines claim that what the decline of cicisbeism shows is that, in relation to marriage, the “visible controlled freedom of the eighteenth century was … replaced in the following century by control without freedom where only hidden infractions were possible” (p. 257). A work of flawed brilliance, the felicitously titled, beautifully covered A Lady’s Man affirms the continuing historical fascination of the politics of intimacy.