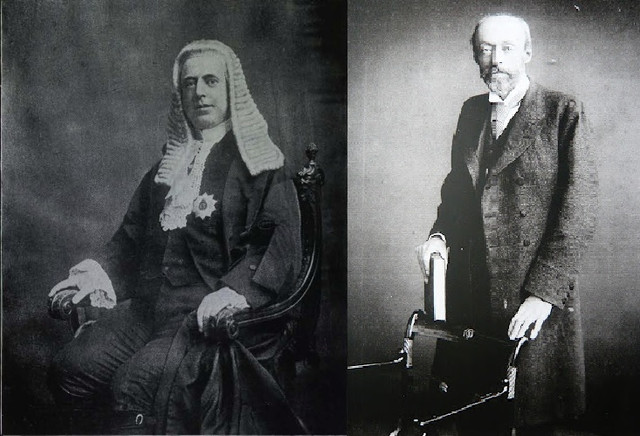 Welsh imperialism existed. It was not as prominent as its English and Scottish counterparts, and its participants not as numerous. But setting forth into the world as an integral part of British imperialism, colonial peoples directly experienced its complexities and contradictions.

Like all imperialism, it took many forms. Most familiar to the historian of empire will be its missionaries, influencing and disrupting indigenous cultures in the North-East of India, especially among the Khasi and Lushai, or Mizo as the latter are more properly known.[1] But even within India, Welsh imperialism had many faces, at all levels of the administration, in business, in the military, and within civil society. Its two most prominent, and contradictory, proponents, at least within the Indian context, were the High Court Chief Justice Sir Lawrence Jenkins (1857-1928), and the Calcutta barrister Sir Griffith Evans (1840-1902).

Welsh imperialism is not a vague device being projected backwards by twenty-first century historians. It was a living concept injected with meaning for the Welsh public of the late nineteenth and early twentieth centuries. As a brief summary, it spoke to this idea of a compassionate, more people-focused imperialism, forged out of the principle that being a British minority, being bilingual, and understanding the process of national self-advancement within a greater whole, gave the Welsh a greater understanding of indigenous peoples, and thus allowed them to govern more effectively.

In 1914 the Times of India summed up this idea perhaps the most elegantly:

‘They had an advantage in being able as a people who were not English to stand between as it were the English administration of this country and the Indian inhabitants, to understand the feelings of both sides perhaps more successfully than anybody else could and that in a very large measure the Welsh people in this country had to assist solving the great problem of how the two races... could live together in peace and harmony and mutual esteem’.[2]

The domestic Welsh press pushed this theme enthusiastically during this period, with similar analyses appearing in major papers such as the Western Mail, the Cambrian, and local publications such as the Towyn-on-Sea and Merioneth County Times. This was not only a lofty idea, but one the Welsh public, through its mass press, subscribed to.

Both Jenkins and Evans also subscribed to this idea but interpreted it in differing ways. To understand its development, one must first look to the context of nineteenth and twentieth century Wales.

Wales by the late nineteenth century was emerging into an enhanced idea of its own nationhood, while simultaneously attempting to shrug off a wider perception of primitiveness, barbarity and immorality. The notorious Blue Books report of 1847 had suggested Wales was being held back by its language and backward culture, a description which hastened the onward march of political non-conformity and the drive to portray Wales as a religious and deeply respectable member of not only the British state, but the British Empire.[3]

By the turn of the century, Wales was not only deeply religious, but the Welsh language had been transformed into a language of literature, with nothing short of a renaissance transforming both the Welsh press and literary scene. The establishment of the National Eisteddfod of Wales in 1861 gave institutional vigour to the development of Welsh nationhood, and into the early years of the twentieth century the Welsh could now regard themselves as a distinct cultural, linguistic, indeed national group within Britain, but which defined itself through ‘respectable’ loyalty to the Crown and the benefits of Britishness.[4]

The ideologies of Jenkins and Evans, of a compassionate, more understanding imperialism, emerged out of this growing sense of nationhood, and through Wales’ experience as a small country but which was part of a greater whole.

So how did this concept express itself through these two individuals? Beginning with Jenkins, his most clear articulation of these ideas came at the 1914 St David’s Day Dinner of the Calcutta Welsh Society, at which he argued the Welsh had a clear role of mediating between the English and the Indian.[5] As a judge, eventually rising to be the Chief Justice of the Bombay then Calcutta High Courts, Jenkins felt this mediation role most keenly.

He attempted to bridge what he saw as a racial divide between British and Indian by promoting Indianisation of the judicial system and applying what he saw as British standards of justice to conspiracy cases, which were often convicted on little evidence. His involvement and acquittals in the Alipore conspiracy case involving Nationalist campaigner Aurobindo Ghosh led to him being branded a ‘race traitor’ by a fellow judge.[6] In a series of letters to the Secretary of State John Morley between 1909-10, Jenkins spoke of his desire for a racially equal India where the British and Indians could work together.[7]

Evans too was impacted by these ideas but applied them to questions of race very differently. The Western Mail reported his remarks at the inaugural Calcutta St David’s Day Dinner in 1899 in the following terms:

‘As a boy he visited Berkshire, and found that, whereas among the working men of Wales they were full of the ideas of another life, could fling hundreds of text of Scripture at one, and discuss predestination and other theological problems, the Berkshire peasants, as a rule, had no idea whatever beyond the next meal. No doubt, the Saxons were a powerful people: they had a bulldog tenacity, and gave backbone to the English race, but he ventured to think that the Welsh gave the spiritual side’.[8]

Evans clearly perceived the Welsh as bringing a moral compass to the empire. However, this moral compass did not extend, in his eyes, to racial equality. In 1883, the Government of India brought forward the Ilbert Bill, designed to give Indian judges the power to try Europeans in some cases. The response of the British community in India was fierce and vehement, and Evans was one of the leading lights against the proposals.

In a letter to the Viceroy Lord Ripon, Evans wrote that ‘native’ judges were ‘inadequate’, and argued, with unsurprisingly little emphasis on why he thought this would be the case, that they would pursue vendettas against the planter community in rural areas.[9]

Evans may well have believed that the Welsh brought the ‘spiritual side’ to imperial governance, but the extent to which this represented a more compassionate imperialism is certainly questionable.

Jenkins and Evans were products, if extreme examples, of an idea that was strong among the Welsh public during this period. They demonstrate that similar ideas can breed very varied results in different environments, and while the press can be very effective at constructing a perception of a national group, the reality on the ground is often much more nuanced.

Welsh imperialism did exist, and it sustained itself through a deep ideology. This ideology grew out of religion, constitutionalism, and a strident belief in the ability of the British state to sustain vibrant cultural minorities. Evolving as it did out of this heady mix, it defined itself as fundamentally benevolent. The reality felt by colonial peoples, however, was often very different.

[3] For an excellent summary of the development of Welsh nationhood see Martin Johnes, Wales: England’s Colony? The Conquest, Assimilation and Re-Creation of Wales (Cardigan, 2019), pp. 126-42.