Northern Slavery Under the British and French Empires 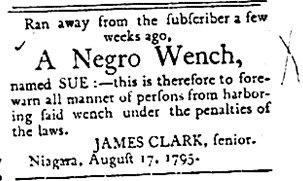 Slavery in North America conjures up images of West Indies plantations or the American south, but its presence in northern sites is noteworthy and under examined. This amnesia is despite Rhode Island’s role as a major hub of the slave trade by the mid-eighteenth century. Figures like Sue fleeing James Clark in Niagara, laboured, toiled, and resisted systems of slavery without cash crops, but served and provided for enslavers in cold, isolated, frontier settlements. Although various regions from Mexico to Canada at different times enslaved both Indigenous peoples and diasporic Africans, this article will focus on the distinct practice of temperate slavery, addressing specific terminology issues and counter popular narratives to draw attention to how slavery functioned in the temperate British and French empires.

Slavery spread through the western hemisphere following Spanish and Portuguese colonization. On the mainland of North America, slavery was transplanted from Barbados settlers who replicated existing slave codes to new British colonies like South Carolina and Jamaica.[1] Other American-British outposts like New England and the Chesapeake also took up slavery.

New France, as an initially vast territory, was plugged into existing Indigenous captive/slave gifting practices.[2] Africans were eventually brought to the colony to supplement the labour force, but unlike other parts of France’s mainland colonies like Louisiana, enslaved Indigenous labourers were the dominant population in bondage. Scholar Marcel Trudel noted that New France slavery was highly democratized with enslavers coming from all classes including farmers, labourers, clergy, military, and government officials.[3] This territory spanned present day Québec, parts of the Great Lakes like Detroit,[4] and the Acadian Maritimes like Ile Royale.

After the Seven Years War in 1760, Britain acquired the territory of New France and expanded slavery in the region, while also recognizing and tolerating that Québec subjects retained their Indigenous and Black chattel property. British-Americans themselves had practiced Indigenous slavery in New England notably during the Pequot Wars,[5] and in South Carolina where slave raids produced the colony’s first commodities before rice cash crops took root.[6] During and after the American Revolution, monarchists known as Loyalists expanded slavery again, settling in parts of British North America like Upper and Lower Canada (Ontario and Québec) and the Maritimes. Many Loyalists brought their enslaved Black people from nearby states like New York, Pennsylvania, Connecticut, and New England.

These sites of northern slavery come with their own unique terminology for scholars to address. The loose terminology of servitude or “servant” was often used for enslaved people suggesting apprehension amongst northern enslavers. Regardless of the euphemism, the practice of slavery is apparent in documents like wills.

Justice Neil McLean at Cataraqui/Kingston, in Upper Canada bequeathed to his wife Mary “my two Negroe servants Sussex and Kate”.[7] Their transmission as property demonstrates that the “servants” were enslaved in practice. In New York, the Manumission Society founder John Jay himself was a slave owner, suggesting that northern enslavers perceived plantation and (semi)tropical practices as the true evil, oblivious to their own exploits.[8]

For northern sites, slavery was smaller in scale with usually one to four enslaved to a household. Scholars had inaccurately assumed that relations between slaves and slave owners were more positive, sometimes with the enslaved sleeping within the home and sharing the table. The use of the term “family slavery” was a perverse sanitization and has been debunked for minimizing the experience of northern slavery.[9] On the contrary, temperate slavery sites had their own unique challenges like loneliness, isolation, constant predations from close proximity, and strategic material deprivation combined with the colder climate.[10]

Lastly the French archive of slavery uses the term panis or panise (as the feminine version), as a legal-racial category that demarcated an enslaved Indigenous person. The name is believed to be a bastardization of the Pawnee nation, a target of Haudenosaunee wars along with the Fox/Renard, but the enslaved from any tribe or nation could be labelled as such. This is similar to how diverse African peoples were fabricated as “Negros” for the purposes of transatlantic slavery.

French slavery was legalized and regulated in the Code Noir as early as 1685, but it is unclear to what extent it was applied in New France.[11] British North America lacked a comprehensive slave-law and in its place, colonies like Barbados, South Carolina, Jamacia, the Chesapeake, New England, and later British-Canada made their own parameters around slavery, punishment, manumissions, and protecting the white-supremacist racial order.

Northern sites like first Pennsylvania in 1780, Upper Canada in 1793, and then New York in 1799 passed gradual abolition laws, not freeing any of the enslaved but legislating children of enslaved mothers to serve mandatory indentures. Other spaces like the Canadian Maritimes never needed to abolish slavery, instead transitioning to indentures for cheap, exploitable Black labour.[12]

While southern slavery has been the focus of scholarship and creative depictions alike, northern sites have emphasized their roles in abolition or the Underground Railroad. Tackling northern slavery is crucial to understanding the foundations of many spaces that are misunderstood. Mainland Britain and France are implicated as well for domestic practices of slavery. French courts heard cases of African chattel brought to the country after the defeat in the Seven Years War,[13] and immigration records from Bordeaux record enslaved African children boarding ships with their owners.[14] In Britain, fugitive slave advertisements first appeared in London as early as 1655 and document runaways in England, Scotland, and to a lesser extent Ireland and Wales.[15] Documents like wills, naval correspondence, or Olaudah Equiano’s narrative demonstrate that slavery existed in Britain’s “too pure air”, to misquote the Somerset decision.[16] The entire transatlantic world and economy exploited the system of slavery, and understanding this fact provides a more holistic picture of imperial history.

Chris J. Gismondi is an instructor at McGill University, former fellow of the Institute for the Study of Canadian Slavery (now Slavery North), and an Advisory Board Member of Slavery North at UMass Amherst. He is a Social Sciences and Humanities Research Council of Canada awarded art historian, and doctoral candidate at the University of New Brunswick.

[4] Tiya Miles, The Dawn of Detroit: A Chronicle of Slavery and Freedom in the City of the Straits (New York: New Press, 2017).

[9] Ken Donovan, “Slavery and Freedom in Atlantic Canada's African Diaspora: Introduction,” Acadiensis: Journal of the History of the Atlantic Region, vol. 43, no. 1 (Winter-Spring, 2014), 111.

[10] Charmaine A. Nelson, “‘Ran away from her Master…a Negroe Girl named Thursday’: Examining Evidence of Punishment, Isolation, and Trauma in Nova Scotia and Quebec Fugitive Slave Advertisements,” in Legal Violence and the Limits of the Law, eds. Nichols, Joshua, and Amy Swiffen (Abingdon, Oxon UK: Routledge, 2018).