A unique? reference system on an 1861 map of Palestine

I have a new post — at Mapping as Process — about a really odd way of mathematizing space, found on an 1861 map of Palestine by a Scots minister. Please respond here if you have thoughts?

The full URL is: 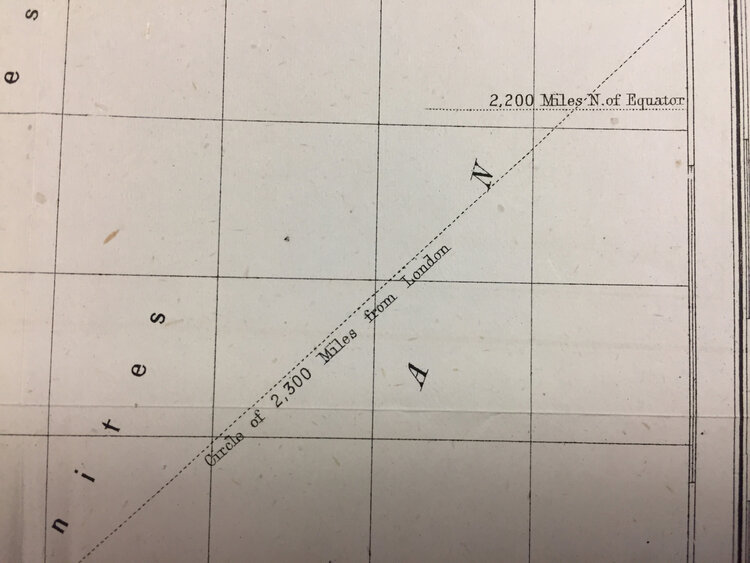 So presumably it's a lat/long projection, so that a square mile grid can be laid atop it. Rather than just providing a horizontal scale bar like most maps, the grid allows easy calculation of distance/area in both E-W and N-S directions, and, by Pythagoras, in oblique diagonal directions too. Lats and Longs in degrees are given, but what does that mean to most people? Not a lot. But giving real distances south of London and north of the equator makes more sense to a layman, esp. a 19th century one. The arcs showing crow-flight distance from London also make sense, and the angle of the arcs gives an idea of direction from London as well as distance. The only weirdness is the miles east of London. At first glance this seems to be a simple conversion of the longitude difference into miles (a more quotidian measuring unit for laymen). But of course the distance depends at which latitude it is measured. Are the longs of London and Jerusalem dropped down to the equator and miles measured there? Is that of Jerusalem taken up to the Lat on London and measured there? Is that of London dropped down to the lat of Jerusalem and measured there? Only this measurement is senseless, but by working backwards you should be able to work out at which latitude it was actually measured. So apart from that one measurement, the others offer a more meaningful units for the average Anglosaxon to understand the location of Palestine/Jerusalem vis-a-vis London than degrees of lat/long. He would have a reasonable idea of the distance from his own town to London in miles, so knowing that from London to Jerusalem in miles allows a rapid, intuitive idea of how far the Holy Land is from his own piece of Albionic paradise. It reminds me of an old nursery rhyme: "How many miles to Babylon? Three score miles and ten. shall I get there by candlelight? Yes and back again".