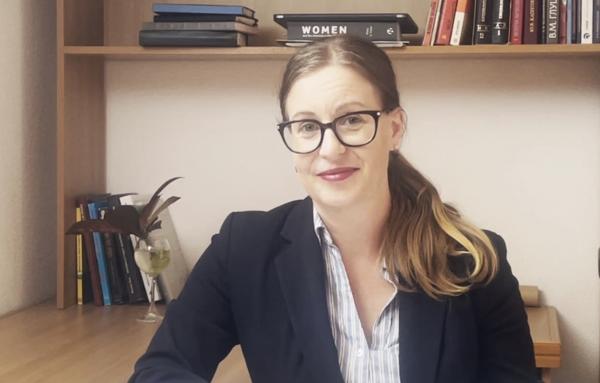 This lecture draws upon over a decade of research toward the book, Superfluous Women: Feminism, Art, and Revolution in Twenty-First Century Ukraine (University of Toronto Press, 2020). Using firsthand interviews, archival documents, historical context, and theoretical frameworks, the author tells the unique story of a generation of artists, feminists, and queer activists who emerged after the collapse of the Soviet Union, but whose ideas and actions were forged in the tumultuous decade between the two revolutions of the 2000s. Gender and sexuality are at the forefront of these activists’ experimentations with the body and public space, circulated online, but locally rooted in 18th - 20th century Ukrainian, Polish, Russian, and Soviet aesthetics. Mapping out several key historical changes in independent Ukraine, Zychowicz identifies discursive links across eras in order to investigate the deeper shifts driving social relations, politics, and international human rights discourse today. This lecture will present in particular how key ideological shifts in the discourse on gender and class, including “the woman question” underpin both social divisions and points of cohesion in organizing around feminism. Case studies include the women's and pride marches in Kyiv beginning from 2010. The first marches had only a few dozen participants, were mostly local, and focused on equality and labor rights; the two marches now draw over 3,000 international participants annually.

Dr. Jessica Zychowicz is the director of the Fulbright Program in Ukraine and head of the Kyiv office of the Institute of International Education. In 2017-18 she was a U.S. Fulbright Scholar in area studies & gender studies to Kyiv-Mohyla Academy. Dr. Zychowicz has held numerous research positions, including at the University of Toronto Munk School of Global Affairs (2015-16), at the University of Alberta (2018-21), and at Uppsala University in Sweden (2019). Dr. Zychowicz earned her doctorate at the University of Michigan in Slavic languages and literatures with a certificate from CREES. She also holds a B.A. from U.C. Berkeley. Over the past three years, Jessica has given over 35 talks and interviews in 10 countries, written over 15 articles, and published her monograph: Superfluous Women: Art, Feminism, and Revolution in Twenty-First Century Ukraine (U-Toronto Press 2020), which will soon also be published in 2022 in both Ukrainian at Krytyka Press, and in Polish at Muzeum Sztuki Nowoczesnej. She is a member of several professional associations in global higher education, including an associate member of the Shevchenko Scientific Society of America, and an advisory board member of H-Net-Ukraine at H-Net: Humanities and Social Sciences Online. Dr. Zychowicz has also worked in U.S. government at Department of Homeland Security in Washington, D.C. as a training specialist for mid-career professionals in digital infrastructure, and she served a full term as a Peace Corps Volunteer to Ukraine from 2005-07. For more information: https://www.jes-zychowicz.com/

Registration for this webinar is required at https://myumi.ch/gj8Eq

If there is anything we can do to make this event accessible to you, please contact us at crees@umich.edu. Please be aware that advance notice is necessary as some accommodations may require more time for the university to arrange.