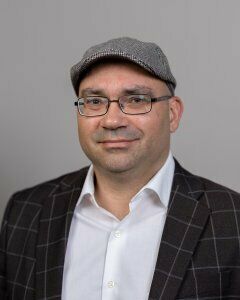 To register and learn more information about this event, click here.

It’s forgotten that academics are not just experts. We must wear many hats.

Putin’s large-scale war against Ukraine is challenging the multi-allied landscapes built by Russia watchers and trans-Atlantic policymakers, given the complex social communities and (geo)political groups we’ve long been hard pressed to hold together. Ideological lines have been crossed, and many post-Cold War assumptions have been tested.

To this end, Steven Seegel will focus on recent round-the-clock work he has done as an engaged geo-historian, podcaster, translator of Holocaust testimonies, observer of maps and of war crimes, chronicler of entangled European postcolonial and illiberal Eurasian worlds, and monitor of citizen-journalists and OSINT communities.

As he continues to assemble The February 24th Archive, one of the most extensive digital archives globally covering the current war in Ukraine, he will stress needs for civic engagement and the infrastructural tools and expertise that are essential to an informed public.

Steven Seegel is Professor of Slavic and Eurasian Studies at the University of Texas at Austin, in residence at the UT Center for Russian, East European, and Eurasian Studies (UT CREEES). He is the author of three books including Map Men: Transnational Lives and Deaths of Geographers in the Making of East Central Europe (University of Chicago Press, 2018), Ukraine under Western Eyes (Harvard University Press, 2013), and Mapping Europe’s Borderlands: Russian Cartography in the Age of Empire (University of Chicago Press, 2012). He worked as a translator for the US Holocaust Memorial Museum and directed the summer program at Harvard’s Ukrainian Research Institute. Seegel has hosted nearly 90 episodes for the New Books Network, which now has 120+ channels and up to five million downloads per month. Throughout the pandemic, he devoted time to brokering sharper alliances with book presses and their editors, to build inquisitive audiences, having actively profiled leading experts in our ASEEES field and numerous BIPOC, LGBTQ+, and first-monograph authors. Elected to the Shevchenko Scientific Society (NTSh-A), he serves on the international board of H-Ukraine for H-Net/H-Humanities and currently chairs the Omeljan Pritsak Book Prize Committee in Ukrainian Studies. He is founder of The February 24th Archive, a collaborative digital history record of the current war, as it continues to expand.

This session will be moderated by Steven Barnes, Director of the Program in Russian and Eurasian Studies and Associate Professor in the Department of History and Art History at George Mason University. He is the series organizer and teaches and researches broadly on the history of the Russian Empire, the Soviet Union, modern Russia, Kazakhstan, and the other independent countries from this imperial space.