“Lasting Impressions” at the Sharjah Art Museum, UAE, has become an annual exhibition that celebrates the work of under-exhibited artists from West Asia and North Africa.[1] Its 11th edition formed an impressive retrospective of the work of Algerian artist Baya Mahieddine (1931-98), known for drawing on the country’s rich Amazigh, Arab, and Islamic cultural heritage. Curated by Alya Al Mulla and Suheyla Takesh, “Baya Mahieddine” (February 25-July 31, 2021) brought together seventy works by an important woman and self-taught modern artist, whose practice puts pressure on a number of art-historical terms and categorizations. (Fig. 1; https://tinyurl.com/mr3pwe6n) 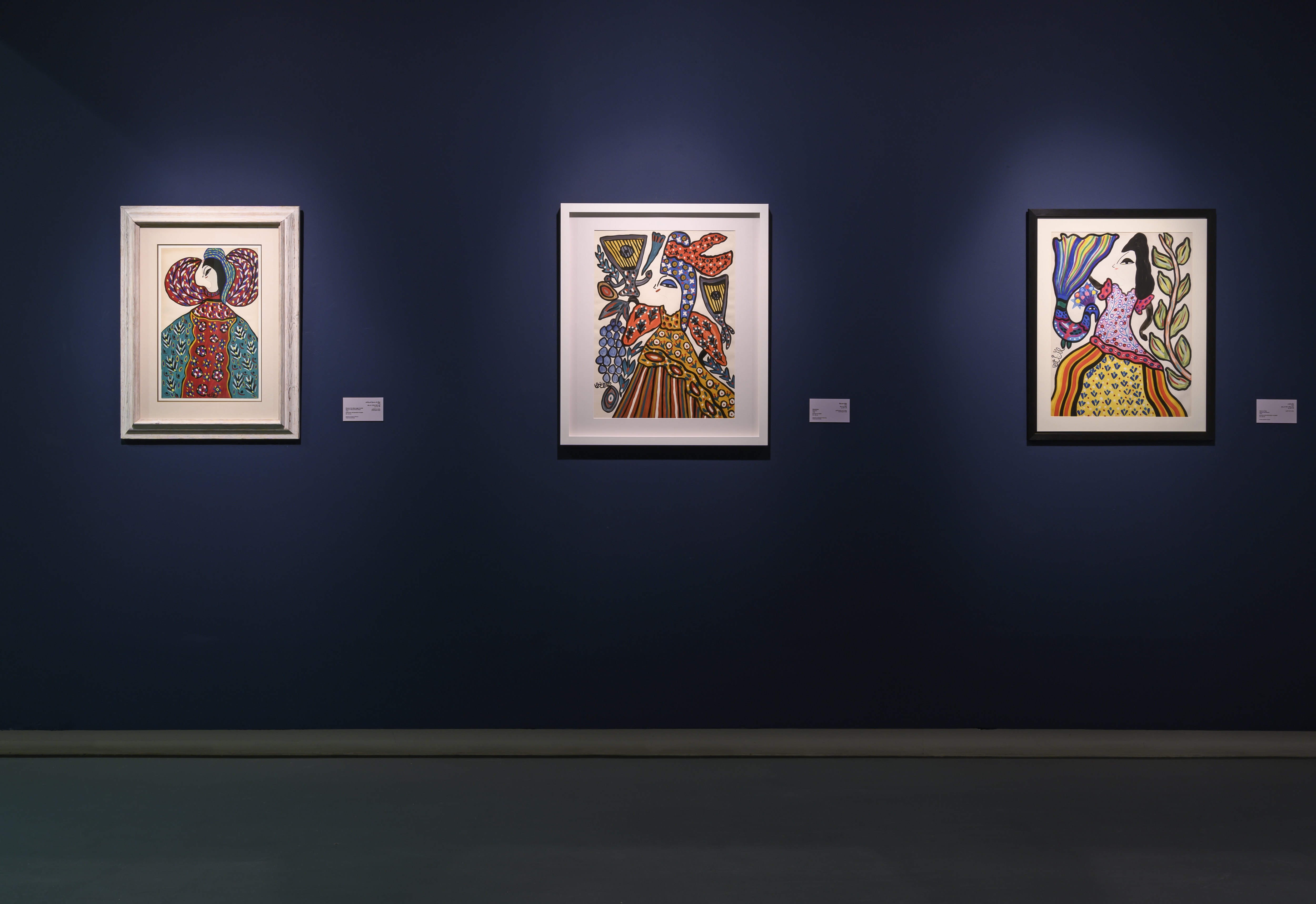 The visual world created by Mahiedinne is one with recurring protagonists: women, birds, musical instruments, fish, and flowers are woven through her oeuvre. Often, the women’s bodies morph into musical instruments or animalistic shapes. Their richly ornamented dresses include peacocks or fish, which then reappear elsewhere in the paintings in fluid, organic forms. The repetition of shapes is evocative, collapsing boundaries not only between the human and animal body but also between the individual canvases. Perhaps to match the consistency and fluidity of Mahieddine’s artistic practice, which seems to defy the flow of time, the curators chose not to create rigid periodizations. The paintings only loosely followed a chronological approach, with Al Mulla and Takesh allowing for a more flexible arrangement of works spanning the 1940s-1990s. Furthermore, it was only when viewers reached the final room of the exhibition that some contextual material was displayed, such as press articles and reviews of Mahieddine’s work. These included a glowing essay written about the-then seventeen-year-old artist by André Breton, who included her work in the International Surrealist Exhibition at the Galerie Maeght in Paris. The curators highlighted Mahieddine’s own short story titled “Le grand zoiseau” (“The Great Great Big Bird”), which was originally published in a booklet that accompanied the artist’s exhibition at Galerie Maeght in November 1947. At the Sharjah Art Museum, the story was reprinted on wall panels both in its original French and in the English translation. (Fig. 2; https://tinyurl.com/ta44a9f2) 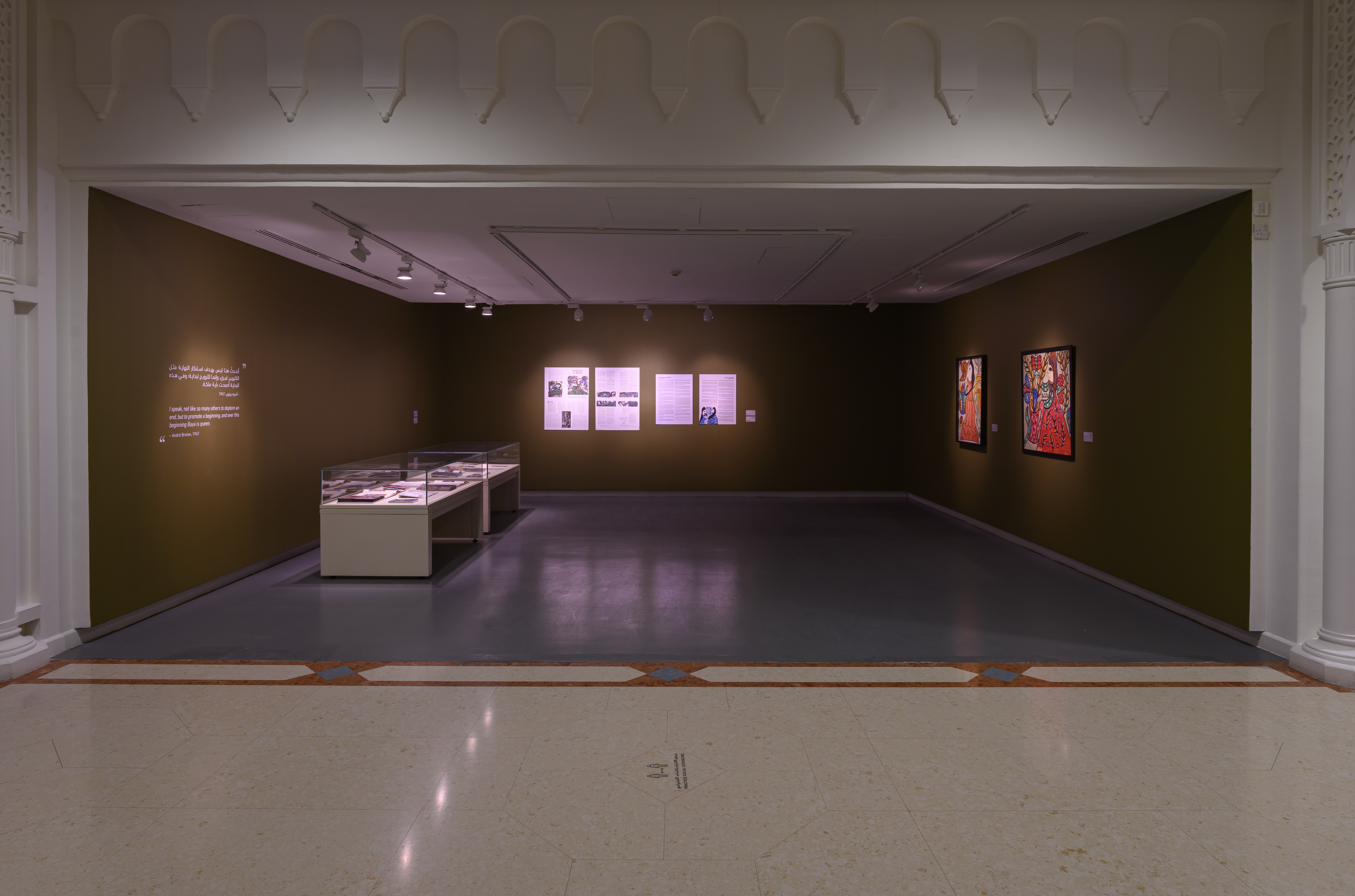 Like Mahieddine’s paintings, her story sets up a nonlinear temporal landscape. The artist narrates the story of a little girl who wants to marry but is faced with her mother’s refusal. She then takes matters into her own hands, embarking on a strange journey with an anonymous “Mister,” and is eventually killed by the titular big bird. Advised by the man, the bird decides to wear the girl’s skin in what is described as a violent morphing of woman and animal. Throughout the story, the girl seems to reappear, as if testing the boundaries between life and death, though it is not certain whether it is her or someone else. What is piercing in the story is the gender-based violence inflicted by men on a young, vulnerable woman, who continues to hover over the story.

Like the little girl in “The Great Great Big Bird,” the women in Mahieddine’s paintings seem to reappear across multiple paintings. They are slightly different each time, although Mahieddine does not paint their individual traits in vivid detail. Using deeply saturated colors and adopting an almost one-dimensional perspective reminiscent of poster designs, she renders the women in a schematic way, marking their features with only a few lines or patches of color. What shifts across the paintings is the women’s interactions with each other as well as with the natural world.

Mahieddine’s works frequently draw on Amazigh motifs such as the fish, a symbol of abundance, as well as the Islamic tradition, in which the spreading tail of the peacock evokes the universe. In several works, the women’s dresses are marked by the pattern of a peacock’s tail, signaling perhaps an attendant transformation. Across many of Mahieddine’s works, the women’s dresses serve as a canvas for other images. Some of the patterns are evocative of Kabyle dress, emphasizing Algeria’s rich pre-Islamic heritage. Significantly, the artist was the sole female member of the Aouchem group, founded in 1967 by artists Denis Martinez and Choukri Mesli in Algeria, whose manifesto centered around deploying Amazigh motifs as magical signs and “rediscovering the intensity of colour.”[2] Not much is known about her position in the group, and the exhibition did not shed further light on her role as one of the signatories of the Aouchem manifesto. What we know, however, is that Mahieddine was well recognized by the art world in Algiers.

This turn to a regional iconography and material culture that includes textiles, ceramics, rugs, wall patterns, and jewelry, among others, defined much of modern artistic practice in the Maghreb. At a time of colonial suppression of local heritage, artists across the region turned to the so-called decorative arts. In Tunisia, the artists of the Tunisian École—Jacqueline Bellagha, Ali Bellagha, Hatem El Mekki, Abdelaziz Gorgi, Zoubeïr Tourki, Safia Ferhat, and others—launched collaborations with artisans and embedded the aesthetics of the decorative arts in their own designs. Likewise, the Casablanca School of Art, led by Farid Belkahia between 1962 and 1974, promoted a pedagogy that rooted modernism in Moroccan visual cultures. Mahieddine, too, was undoubtedly influenced by women’s embroidery and Kabyle dresses, even if she is known to have defied ideas about her work as drawing on Amazigh heritage, a perplexing claim considering she was one of the signatories of the Aouchem group. (Fig. 3; https://tinyurl.com/35znhs9b) 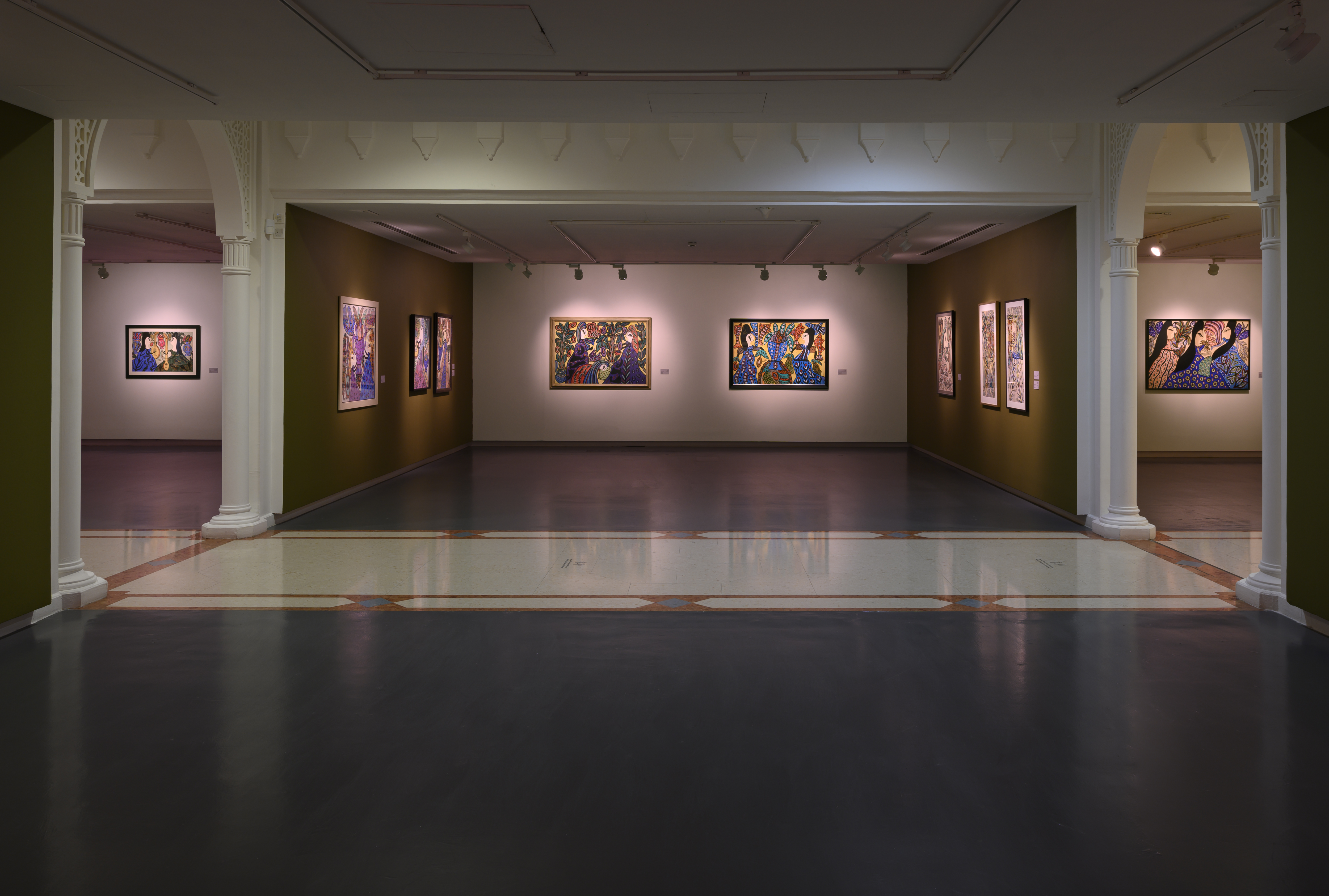 These paradoxes make Mahieddine a somewhat mysterious figure who has of late been increasingly foregrounded as a key modern artist from the region. A video interview with the artist, conducted by Salwa Mikdadi in 1993 in Blida as part of her research into women artists in North Africa and the Middle East, is included in the exhibition. This footage may frustrate the viewer’s curiosity about Mahieddine and her work, for the artist remains elusive in the conversation. Asked about her choice of floral and animal motives, she smiles and answers, “it is because I was feeling them, there was this power inside me that made me feel them,” while a question about the role of African, Maghreb, Islamic, and European influences is answered in an equally evasive way: “I don’t know, because to me what I am doing seems perfectly normal. I have never been to Africa, I have never been to Morocco until now. And therefore I am painting what I feel. I cannot give an opinion on the matter.” It is also known that Mahieddine would refer to her own work as “Bayaism,” again frustrating any desire to place her work in a broader, comparative framework. (Fig. 4; https://tinyurl.com/msydjnz2) 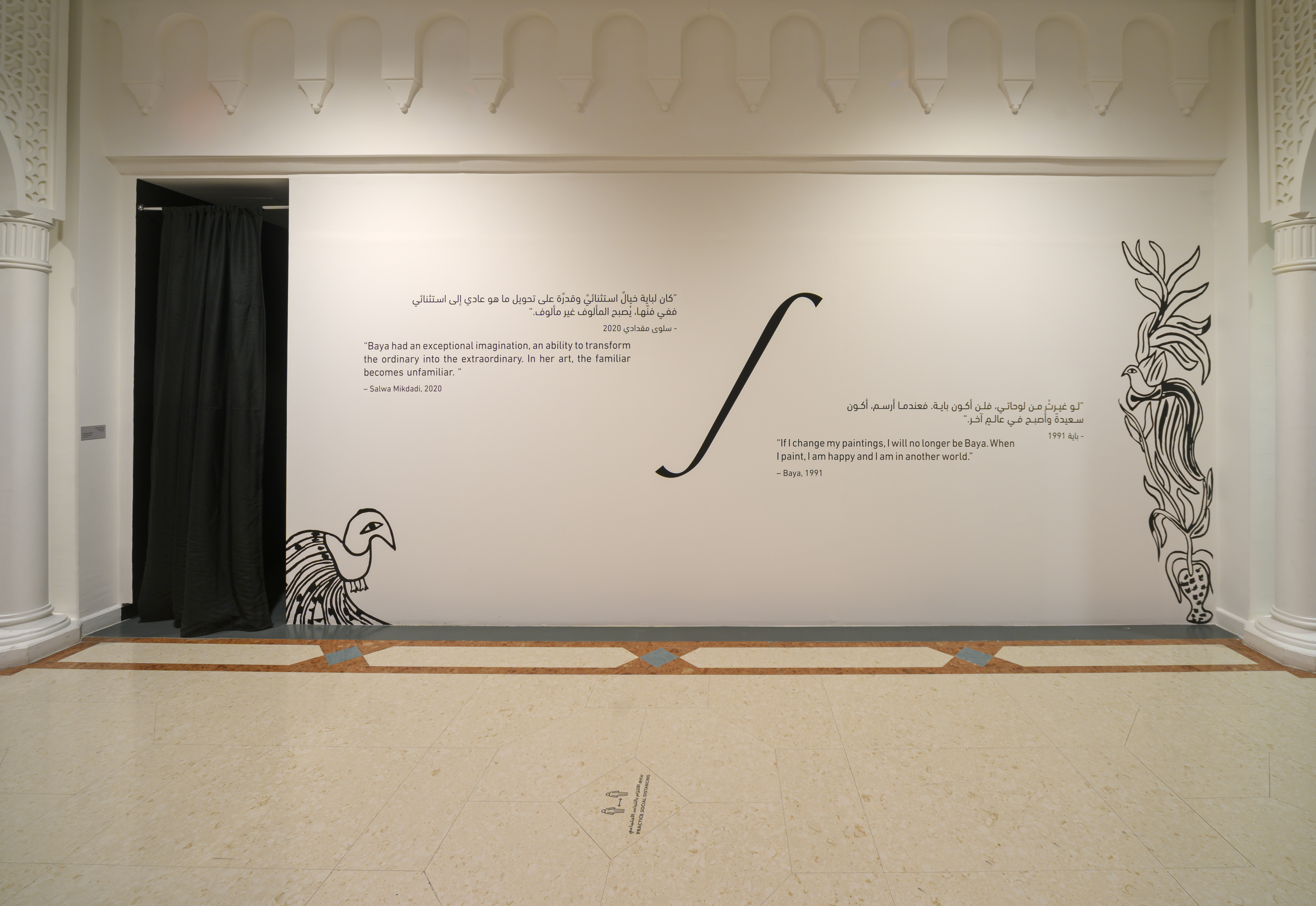 Mahieddine’s work still awaits serious scholarly attention that could locate her painting in relation to local, regional, and transregional influences; explore her choice of gouache, watercolors, and ink over acrylic or oil paints; and trace her encounters with other artists, including Denis Martinez (as part of the Aouchem group) and Pablo Picasso in France (between 1948 and 1952, when she worked alongside Picasso at the Madoura ceramic studio in Vallauris). Her status as a self-taught artist, which she shared with the artist Souhila Belbahar, also merits further examination in order to unravel the complexity of both their works. The many unanswered questions and paradoxes surrounding the artist risk turning her into a near-mythical figure, who is frequently referred to as “Baya” in publications, with her surname entirely dropped. The accessibility of the works, many of which were on loan from El Marsa Gallery (Tunisia/UAE), the Ramzi and Saeda Dalloul Art Foundation (Lebanon), and Galerie Maeght (France), should encourage us, however, to continue serious research into her artistic practice.

“Baya Mahieddine at the Sharjah Art Museum” might have benefited from more contextual framing, especially given that her family in Algeria was involved in the preparation of the exhibition. As with many modern artists from Algeria, oral history and recollections are key tools of research, and locating Mahiedinne’s work through interviews with her fellow artists and family might have provided a more thorough background for the work. Regardless, the exhibition, prepared and opened in the midst of the pandemic, shows incredible curatorial energy and determination to bring a large number of rarely seen works to the public. It built on previous exhibitions dedicated to Baya Mahieddine, including “Baya: Woman of Algiers” (Grey Art Gallery, January 9–March 31, 2018), and joined several other museums such as Museo Reina Sofia (“Moroccan Trilogy, 1950-2020,” March 31–September 27, 2021) in presenting the work of modern artists from West Asia and North Africa, despite the grave uncertainties wrought by the pandemic.