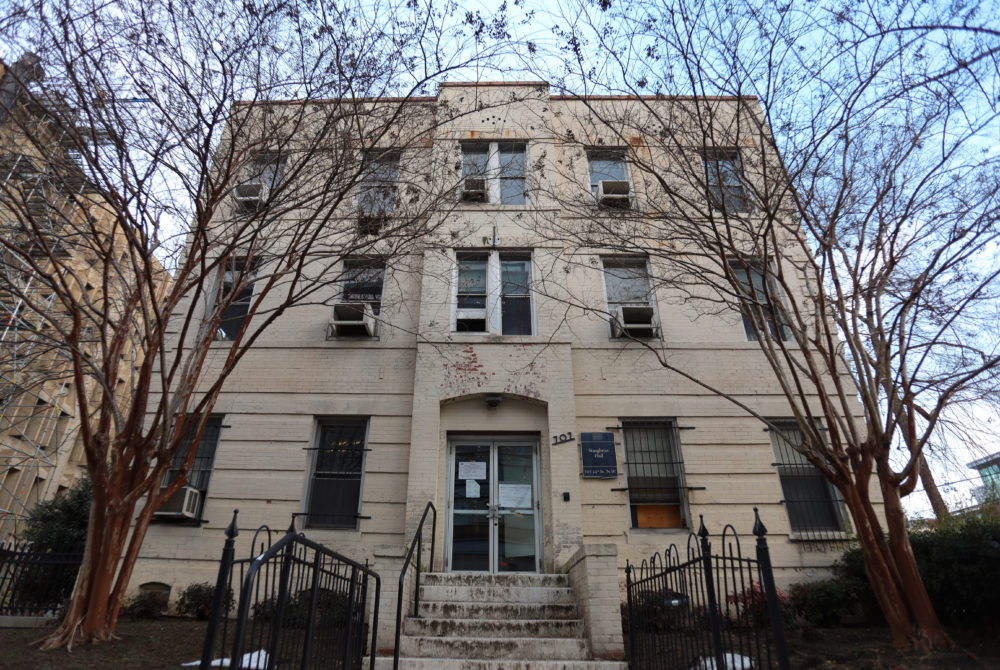 Preparations for the demolition, like asbestos removal, plumbing and gas inspections, are in progress.

If you’ve walked down 22nd Street, you’ve probably seen the yellow-hued brick building that’s been nestled behind Gelman Library for more than 100 years, housing women’s residence halls and naval research throughout its time in Foggy Bottom.

But the now-vacant Staughton Hall will be demolished later this year as part of GW’s 15-year-old plans to develop the site.

Officials said they applied for a permit to demolish Staughton Hall and turn the area into green space in July before the D.C. Department of Consumer and Regulatory Affairs approved the application in August, but there is no specific timeline for the site’s redevelopment. A University spokesperson said officials are removing asbestos from the building as they prepare for demolition.

Some local community members have raised concerns about the University’s decision to destroy old buildings on campus because of their century-long presence in Foggy Bottom. The spokesperson said GW has met with community members to discuss the plans to demolish the building and its redevelopment but did not share any more details about the nature of the meetings.

“While a timeline has not been developed for a new building, Staughton Hall has been vacant for many years, and the site is well suited for additional green space until the redevelopment occurs,” the spokesperson said in an email.

DCRA’s website shows that preparations for the demolition, like asbestos removal, plumbing and gas inspections, are in progress.

Frank Leone, a co-chair of the Foggy Bottom Association’s project that has documented the history of buildings in the neighborhood, wrote a blog post in November exploring the building’s history as GW’s second women’s residence hall and the home of a U.S. Navy research center during the Cold War. Leone said while the FBA has not announced official opposition to the destruction of Staughton, the demolition is representative of a larger issue with the University’s development plans, which has destroyed buildings that the FBA deems historic.

The association criticized the University’s decision to tear down the former Nashman Center for Civic Engagement and Public Service building, also known as the Waggaman House, last year leading up to its demolition in October. Leone said members of the association were disappointed the University tore down the building without photographing or documenting the structure and its history.

GW designated six buildings – Fulbright, JBKO, Madison and Munson halls, the GW Deli building and the Medical Faculty Associates facility – as historically significant in 2010 as part of the 2007 Foggy Bottom Campus Plan, which set the course for GW’s construction and demolition plans.

Leone said officials should release reports on buildings before their demolition, with information including their previous owners. He said the University should work with a historical preservation company to photograph and record the building’s history before it is destroyed.

John George, the president of the association, issued a letter to the Foggy Bottom and West End Advisory Neighborhood Commission last March urging commissioners to consider preserving the Waggaman House after efforts to lobby the University were unsuccessful.

“When I have raised these issues with GW before, the response has been, ‘Well we don’t have money for that,’ which is frankly kind of silly,” Leone said. “If they’ve got money to demolish a building, they certainly have enough money to document its history and take a look at it as they proceed.”

Leone said he wishes the University spent more time talking to students about the campus history or taking action like placing more plaques detailing the history of buildings in Foggy Bottom. He said officials authorized him access to the Waggaman House before it was demolished to document the design and status of the building with pictures.

“I appreciated them letting us in, but it would have been nice if they had a policy as to how they are going to treat their older buildings that may not qualify as historical landmarks but say a lot about the history of the University and the history of the community,” he said.

This article appeared in the January 24, 2022 issue of the Hatchet.

I wonder how involved the historic preservation department has been in GW's actions? Have students do some of the history/documenting work as class projects?