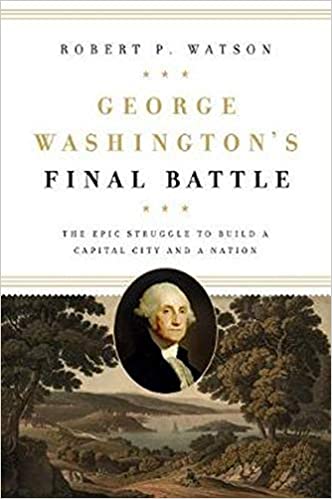 George Washington, more than any other Founder, is responsible for the capital city. He realized we had some big challenges — this upstart nation lacked credibility in the eyes of Europe, the  weak government which seemed doomed to fail, political factions and sectionalism were tearing the nascent republic apart, and the people lacked a sense of national pride or American identity. The years after the Revolution were challenging — winning the war seemed to be the easy part and left people wondering, “now what?” Washington’s vision of a grand “city for the ages” as our capital would help address all those pressing issues. It, he hoped, would unify the people and imbue them with a sense of national identify, while also propping up the fledgling government. Washington understood the politics of architecture. The nation, government, and capital would all be new — they would therefore grow up together, and the location and nature of the capital city would thus influence the development of the government and nation.

Starting a brand new nation and new style of government without having a capital city is no way to proceed. We went years without a permanent seat of government and roughly 30 cities were, at one time or another and to one degree or another, proposed to host the federal government. There were also competing visions of what such a capital city should look like. Jefferson and his supporters, for example, preferred a small “federal town” of a few acres and few single-story brick buildings. Such a capital would symbolically reflect a weak federal government (which was an attractive idea to slave owners and those favoring states’ rights). Others joked that maybe we should have multiple capitals — a wandering capital whereby Congress should build a trojan horse and hide in it while it was wheeled from capital to capital. In the end, however, it would be Washington who had the vision for the capital city and he who played a lead role in selecting the site, hiring the architects, surveying the grounds, assuring lots were bought and sold, selecting the federal district’s commissioners, and even visiting the site of construction to monitor the progress. It was his city!

3. What are the most important influences on your telling of this story?

I have always enjoyed the Founding era and have been researching and teaching the period for my entire career. So, it was a topic I enjoyed and understood. Moreover, I had the wonderful opportunity to interview David McCollough, Ron Chernow, Gordon Wood, Joseph Ellis, Richard Brookhiser, and a number of Pulitzer Prize winning biographers and historians, who have written important books on the Founders. This experience got me thinking about stories from the Founding that are not well known but need to be told.

4. What are the myths or misconceptions you’d like to dispel about this subject.

Well, obviously any time I visit a K-12 classroom and often when I am speaking at libraries and public venues, people will ask if Washington had wooden teeth and really chopped down the cherry tree. Those are fun legends and talking about them gets a laugh but also makes people interested in learning about the real George Washington. The city was literally built from scratch in an area that was fields, woods, and bogs. To that end, it seems also that people have the view that once the city was built it was the majestic city we know today. It wasn’t. Not close. John Adams, who first moved into the building that would become the White House, found it cold, damp, unfinished — only six rooms were complete — smelling of wet plaster, and the groups were a muddy sea of saws, hammering, and construction debris. The roof even leaked. Many Americans did not like the city and it took years to become the city we’d recognize today.

5. What are the classics in the field (if any)?

Fortunately for my book, there aren’t a lot of books on the topic. That said, Kenneth Bowling has written and edited a few sources that, even if they aren’t widely read, are among the most insightful of the literature. This includes his edited Documentary History of the First Federal Congress… and his books The Creation of Washington, DC and his book on the architect of the capital city, L’Enfant. Likewise, Fergus Bordewich’s Washington: The Making of the American Capital is a must read. [Note: Adam Costanzo. George Washington’s Washington: Visions for the National Capital in the Early American Republic. Early American Places Series. Athens: University of Georgia Press, 2018; https://matthewbgilmore.wordpress.com/2018/09/20/adam-costanzo-interview-with-a-washington-dc-history-author/]

6. What challenges did you face in this research?

One of the first was moving beyond the narrow depiction of George Washington in order to be able to capture his more complex personality in order to bring him to life. Another was trying to figure out when and how he began developing his vision for the nation and capital. Washington could be frustratingly tight-lipped. Another challenge was trying to imaging the heated debates about having a capital city, when the question seems so obvious to us today, just as I needed to remember that the site of the capital was then fields and forests — nothing like the city we know today. All this is obvious, especially for a historian. However, we need to remember that, for such indelible places and events — like the capital city and Founding — people have preconceived and firm views.

7. What were the most important resources you found (and where)?

Fortunately, the writings of George Washington, Alexander Hamilton, Thomas Jefferson, and other leaders who had a front-row seat to the events in the book have been preserved and are rather voluminous. But I really enjoyed and found the letters of William Maclay of Pennsylvania and Fisher Ames of Massachusetts to be helpful. I simply sat and read dozens and dozens of their letters before getting started. These two members of Congress were opinionated and gossipy, and didn’t hesitate to share their views. They were also quite full of themselves, so their letters helped me to feel like I was part of the gossip back then about Washington and the capital city.

8. Are there sources you wish existed but don’t?

Yes, indeed. Enslaved individuals built much of the capital city and worked in grueling conditions quarrying the stone. It would be remarkable and insightful to read their accounts and impressions. But the same can be said writ large for history — to have the voices of the voiceless. One former slave, Benjamin Banneker, helped Andrew Ellicott survey the city. Banneker was an impressive individual and rendered the nation that enslaved him a great service, but much of his writings are lost to history.

Even though I am an academic and write about events in history, I try to write for a wide and general audience. By focusing on the personalities and narrative arc of the story, I hope the book is accessible to most everyone. The story certainly deserves to be shared widely and I think most people would find it interesting.

I’ve been a professor for three decades and taught at a number of universities during that time, while also lecturing at many colleges, museums, and historic sites as a visiting scholar or fellow. I also like to travel and, for many years, have been lecturing on cruise ships and leading history tours.  I think all those experiences have helped me in my research and writing because I always seem to be telling stories from history (one way or another) and to all sorts of audiences. I think it has helped me to kind of figure out how to tell a story and what aspects of history people find interesting.

11. What inspired you to write this book?

Two things. One, we all love our capital city — the tree-lined mall, the majestic government buildings, the world-class Smithsonians, and the touching monuments and memorials — but I find that most people know little about how the city came to be. Two, any school kid knows about George Washington. But the depiction of Washington in textbooks, popular culture, and even in the scholarly literature is often monolithic. I wanted to flesh out two traits of his character that are rarely discussed and that is that he was a visionary and he could be quite political — Washington could lobby for votes, cut deals, make compromises, and the like. What is interesting is that nowhere are these two traits on better display than in the building of the capital. It was Washington’s vision and he did what needed to be done to make it a reality. Likewise, a third aspect of his character was that he was creative and innovative. At Mount Vernon, Washington was always experimenting with new seeds, crops, and agricultural techniques and he even tried aquaculture and distilling. As a general, he did not have the benefit of a classical military education, which meant he was kind of making it up as he went along, but he was a quick learner and adapted his approaches and leadership accordingly. The same can be seen in the vision for the capital city. That remarkable vision should have come from one of the other brilliant, well-read Founders… but it didn’t; it came from the one lacking the formal education. But again, here we see Washington’s creativity.

12. What’s unique about your perspective?

I am focusing on the aforementioned traits of George Washington, which are important aspects of his personality but are usually overlooked.

My publisher, Georgetown University Press, has several interesting books on our capital city, covering everything from the history of race relations to spy sites to jazz in the capital. I have found the works of Kenneth Bowling and Bob Arnebeck, both of whom write on the capital city, to be very helpful.

I just finished the first draft of a book on the British burning the capital city in August of 1814 as part of the War of 1812. It is tentatively titled When Washington Burned and will be published by Georgetown University Press. The project seemed to be a good “book end” to my book about how the capital city was built and its role in shaping the nation, because the city would need to be rebuilt and the debates surrounding it also impacted the continued development of the nation. Plus, there are some really intriguing stories of courageous clerks rush about to save invaluable historic documents from the flames, Dolley Madison remaining at the building now known as the White House until the final moments, whereupon she saw the residents of the city fleeing for their lives and the British marching into the city.