No charge to attend

From Congress Heights to Cathedral Heights:  Retaining Neighborhood Character in a Time of Rapid Development

What’s special about your neighborhood?  Are you concerned about protecting its character as our city grows and changes?  Will Cook, co-author of Neighborhood Conservation Districts, will share community conservation tools from other cities, two DC neighborhood leaders will respond and you will have the opportunity to ask questions.

Check back periodically for additional information.

I responded to this as a blog entry, here: http://urbanplacesandspaces.blogspot.com/2020/02/treating-entire-city-as-conservation.html

Treating an entire city as a heritage area/conservation district, rather than a neighborhood by neighborhood approach

In the trade, CDs are seen as a "lesser evil" by residents who might not want the level of scrutiny on changes to their property that a full-blown historic district tends to require and by advocates and professionals as "better than nothing/don't let the perfect be the enemy of the good" where getting people to agree to a historic district is likely to be out of the question, but getting people to agree to lesser protections is possible.

(Note that a lot of people have a hard time grasping the concept of a neighborhood historic district, because to them, only "big deal" buildings like the US Capitol or Independence Hall in Philadelphia are "historic.")

NCDs aren't a new concept to DC.  Neighborhood conservation districts have been discussed off and on in DC since the early 2000s.

I haven't been a proponent because they are more "historic district lite," e.g., typically don't include restrictions on demolition and may be somewhat cavalier about particular architectural elements and require just as much community, social and organizational capital to create as a historic district, and it seems like one of the justifications for NCDs, that they can lead to a historic district, is unlikely to be realized, because you need two campaigns marshaling community, social and organizational capital, not just one.

Not to mention that you need a massive campaign just to get NCDs legalized as part of the city's building regulation legal and regulatory framework, something that HPO wasn't able to do c. 2007 when the then director advocated the creation of NCDs.

The city's built environment should be managed as a whole, as a heritage area.  In comments I've made in the past on previous iterations of the city 5 year historic preservation plan, I've suggested that the city's built environment should be managed using the principles of cultural landscape management, that the whole city should be considered "a heritage area" and managed (regulated) in that manner.

My most recent summation of this concept is item #14 in "What would be a "Transformational Projects Action Plan" for DC's cultural ecosystem":

The city should acknowledge the built environment as a key element of the city's identity, in particular historic architecture and urban design.   This is Item #3 in "40th anniversary of the local historic preservation law in DC as an opportunity for assessment," 2019:

Treat the entire city as a "heritage area" from the standpoint of the design management of the built environment, using the concept of the cultural landscape, so that all buildings would have some basic design review and demolition protections, regardless of whether or not they are listed either individually or as part of an existing historic district. 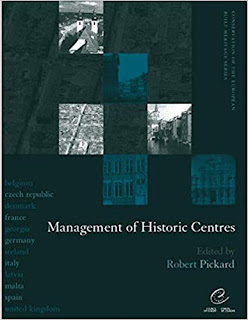 Otherwise, so many buildings and neighborhoods are unprotected now, and likelihood of protection is slim, e.g., our 1929 bungalow is quite intact, but there is no chance our neighborhood would ever become a historic district, or that a typical building of its type (e.g., bungalow, Craftsman style rowhouse, Italianate frame or rowhouse, Queen Anne rowhouse, etc.) would be able to be designated individually as opposed to being a contributing structure in a neighborhood historic district, except in exceptional circumstances.

In the US, there are two types of heritage areas, either state or federally designated.

I am not arguing that we need to create a formal heritage area in DC.  Rather we can use that framework, that is thinking about the city in its entirety as a cultural landscape, for managing the city's built environment.

Locally, Maryland has a system of state heritage areas, although they have limited additional protections concerning designation and protection and are more focused on tourism development.

Historic architecture, urban design, and historicity are fundamental elements of the city's "competitive advantage" and "unique selling proposition."  Treating the city as a heritage area is justifiable because the quality of the built environment, marked by historic architecture and urban design and the city's historicity (which I define as the nexus of people/history and the built environment) are key elements of the city's "competitive advantage".

But I recommend taking the heritage area concept a step beyond, and utilizing it as a way to provide for overall regulation, review, and management of the aesthetic qualities of buildings, whether or not a particular area is designated as a historic district.

Some cities do a type of this, differently from DC. DC's HPRB, CFA, and Old Georgetown Board have purview in certain areas. But Baltimore's architectural review process goes beyond historic districts, depending on the type of building. In the core of the city, Lancaster PA operates similarly.

Look to heritage conservation efforts outside of the US for guidance.  My thinking about this has been fueled mostly by writings about heritage management in Europe, and UNESCO related publications.  Although I was first introduced to the overarching concept of the "cultural landscape" in presentations here, at national and local conferences.

And come to think of it, my thinking about civic assets as networks had to have been influenced by Kathy Smith's Capital Assets, which looked at various DC neighborhoods in terms of heritage assets and their readiness for as places for tourism "off the National Mall."

But also Stephen Semes and The Future of the Past: A Conservation Ethic for Architecture, Urbanism and Historic Preservation, which argues for consideration of context and the organizing principle of the ensemble and "architecture of its place" rather than the single building and architecture of its time.

-- "An argument for the aesthetic quality of the ensemble: special design guidelines are required for DC's avenues," 2015

Although these books don't necessarily make the same policy recommendation that I do.

What elements do I think matter most?

Coordination and basic review.  And even in this approach, I don't necessarily recommend the maximum picayunish approach to review, but something along the lines of the "Business Revitalization Overlay District" in Cleveland, where to ensure the coordination of projects and investments, basic design review is conducted.

A focus on protecting the aesthetic qualities of the architectural ensemble.  Probably, the most important point is made by Stephen Semes (The Bias Against Tradition," Wall Street Journal) in his book where he argues in favor of classical design as a way to protect and strengthen the architectural character of existing places, when by contrast new design is frequently discordant and diminishes the strength of the built environment as an ensemble. From the article:

"Maintaining a broad stylistic consistency in traditional settings is not a matter of 'nostalgia,'" he says. "It's a matter of common sense, of reinforcing the sense of place that made a building or neighborhood special to begin with. But many academically trained preservationists want to impose their inevitably subjective notions of what the architecture 'of our time' is."

Like materials, architectural style, etc. are key elements that must be considered.  This isn't an exhaustive list, but what comes to mind right now.  Note that one of my complaints about the DC Historic Preservation Plan, a document updated every five years, is that it doesn't include bad examples, only good ones.

Demolition protection.  Only with a super good reason should demolition of pre-1930 residential buildings be allowed.  Receivership and other procedures should be implemented to maintain properties in the face of owner intransigence and demolition by neglect ("Pennsylvania passes receivership law with regard to vacant/nuisance properties," 2010).

Overall design
-- tear downs and McMansions
-- tear downs and ground up rebuilds
-- rowhouse popups (I'm not against, but design guidance is key)
-- architectural style: inappropriate design in terms of the ensemble
-- other types of supersizing of houses
-- scale (mass and height), especially of additions 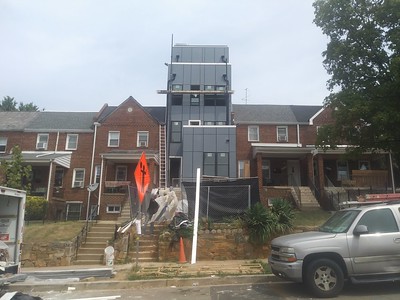 Definition of the word abomination. 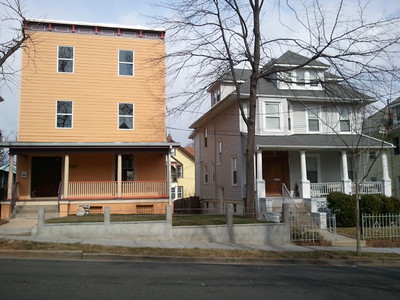 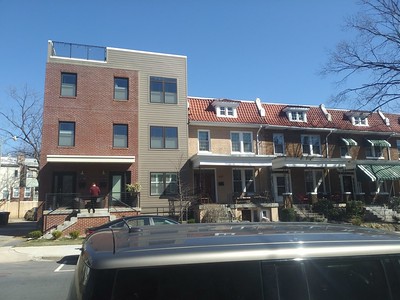 Infill at the end of a group of rowhouses. 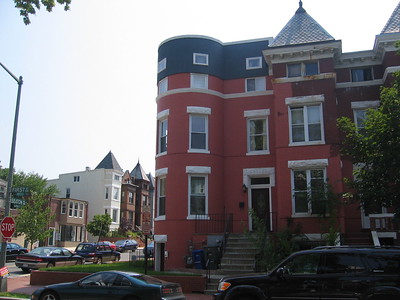 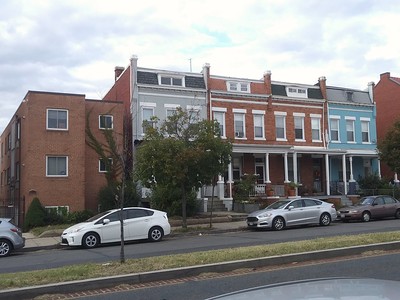 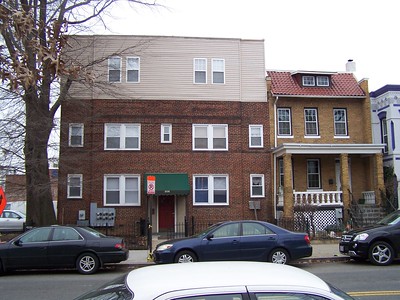 Specific elements
-- brick vs. siding
-- maintenance of wood frame
-- turrets and roof projections
-- porches (especially tearing them off)
-- doors (and garage doors)
-- windows
-- fences and stone walls (too many stone walls are replaced with concrete block) 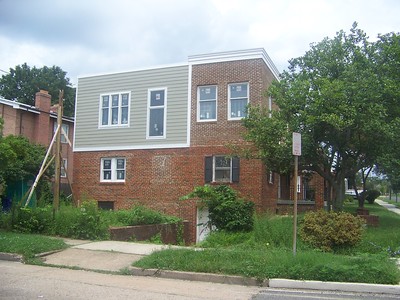 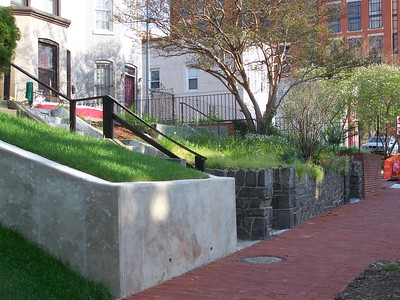 A poured concrete retaining wall rather than the historically appropriate stone.  Sadly this was done by the DC Department of Transportation.  When I questioned them about it, their response was "it's not a historic district."

The Capitol Hill Restoration Society has a nice set of district-specific publications on architecture and architectural elements.

The now defunct Community Design Center of Pittsburgh had a similar set of publications on key architectural elements, five 2-page documents on "Your Home," "Your Roof," "Your Windows," "Your Walls," and "Your Porch" because "Anything you do to the outside of your home affects not only the value and character of your own house, but also the entire neighborhood." (Somewhere in my morass of stuff I have printed copies. When I find them, some day, I'll make scans.)

An essential element: creating a preservation repairs support fund.  Of course, creating requirements for better maintenance of a house would be controversial and more costly, although in a city like DC, the extra cost of maintenance to historic standards comes back in higher property values.

[Photo won't reproduce, https://www.flickr.com/photos/rllayman/8703389127}
Rather than repair this distinctive turret, because of the cost, it was parged instead, severely diminishing its architectural and aesthetic charm.

At the very least, a program should be put in place to provide low cost/no cost loans and grants to assist people of limited financial means.  This includes both residential and commercial property owners, depending on the circumstance.  DC has such a program now, but it isn't fully funded, and rather than apply everywhere, based on need, it targets specific neighborhoods in a haphazard manner.