Desegregation, Suffrage, Jewish, African-American, and Other Resources Digitized and on ExploreUK

Online and open access to archival resources is more important now than ever in light of the COVID-19 pandemic. With that in mind, UK Libraries Special Collections Research Center is happy to announce the following collections are available on ExploreUK.

The Norman family papers (dated 1787, 1877-1899; 0.2 cubic feet; 2 folders) consist of a mathematics copybook written by Reuben Norman for his son Caleb Norman. The copybook contains significant handwritten marginalia from Caleb as well as many others. The collection also includes several letters from the late nineteenth century, including one written by L.C. Norman, president of the Old McBrayer Distilling Company in 1899. 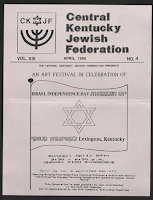 Jewish Federation of the Bluegrass records bulletins and newspapers

The Richard B. Isenhour architectural drawings (dated 1952-1989; 4 cubic feet; 14 folders) comprise design drawings for 80 residences and one medical building designed by architect Richard B. Isenhour, with most of the properties in Lexington, Kentucky, but also including structures in South Carolina, Florida, and North Carolina from 1952 to 1989.

The Kentucky Negro Education Association journals (dated 1916-1952, 68 volumes) include proceedings of the organization's meetings and official publications. The organization was formed when State Superintendent of Public Instruction H. A. Henderson in 1877 when he gathered 45 Negro educators and trustees to form the State Association of Colored Teachers. In 1913 it was renamed the Kentucky Negro Educational Association (KNEA). This representative body of Kentucky's Negro educators was an influential lobbying group for education issues. Annual conferences were held in Louisville, KY. In response to desegregation, the organization was renamed the Kentucky Teachers Association, though it was still referred to in general conversation as KNEA. In 1956, KNEA was subsumed into the formerly all white Kentucky Education Association. KNEA was the predecessor to present day organizations such as the Kentucky Association of Blacks in Higher Education. 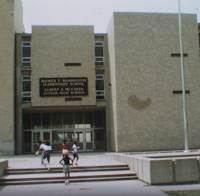 WAVE-TV Louisville news coverage of the 1975 federal court order to racially integrate the Jefferson County Public Schools through busing. This court order was supported and protested through a number of public demonstrations and rallies on both sides of the debate. These are the edited news footage packages that were shown during the nightly reporting of the events and issues around desegregation of the Louisville, Kentucky public school system beginning in July and running through December of 1975.