Youth movements in Eastern Europe and beyond are and have been important drivers of protest. Recent research, examining these movements and regime responses to them, reveals themes and patterns of broad political relevance and academic interest. Examples abound on H-Net, including reviews of new works on youth movements and mass protests from a wide variety of eras, locales, and political orientations. This original essay introduces new work on youth movements in 21st century Eastern Europe. Author Olena Nikolayenko examines recurring themes across these movements, and, in addition to providing greater depth to our understanding of Eastern European popular protests, suggests ways that scholars might examine youth mobilization in other contexts.

On March 26, 2017, scores of Russian young people joined anti-corruption protests organized by the opposition politician Alexei Navalny in Moscow and nearly one hundred Russian cities. Given the conspicuous presence of high school and university students at the protest event, some observers of local politics described this phenomenon as the Schoolchildren’s Revolution (revoluitsiia shkoloty). The youth’s audacious display of dissatisfaction with rampant corruption in Russian society was seen as a threat to the ruling elite. In response, the police arrested more than one thousand protesters in Moscow alone, with at least seventy of them under the age of eighteen. A number of young people were summoned by police and subjected to psychological intimidation. In addition, parents were admonished to keep their children off the street and threatened with the loss of parental rights for their lack of supervision over their children's engagement in contentious politics. It has yet to be seen how young voters will behave during the 2018 presidential elections in which Vladimir Putin will run for a fourth term in office. In anticipation of a clamorous election season, Russian youth might draw some lessons from earlier episodes of contention in the region. 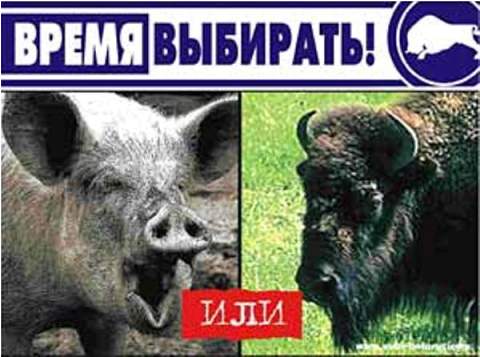 Zubr Poster “It’s Time to Choose” The poster presents people with a choice: a pig, a symbol of rather immoral behavior, or a bison, a national symbol of Belarus.
Image courtesy of the author.

Eastern Europe has witnessed a tide of youth mobilization against fraudulent elections in the early 2000s. The Serbian youth movement Otpor (Resistance) played a vital role in bringing down Slobodan Milošević during the 2000 federal elections. Inspired by Otpor’s example, similar challenger organizations emerged in the former Soviet republics. Within a few months after Milošević’s downfall, the youth movement Zubr (Bison) was formed to press for free and fair elections in Belarus. Likewise, the youth movement Kmara (Enough) demanded political change in the Republic of Georgia during the 2003 parliamentary elections. The next year Pora (It’s Time) activists protested against fradulent elections in Ukraine. Moreover, several youth groups, including Maqam (It’s Time), Yeni Fikir (New Thinking), and Yokh (No), were set up on the eve of the 2005 parliamentary elections in Azerbaijan. 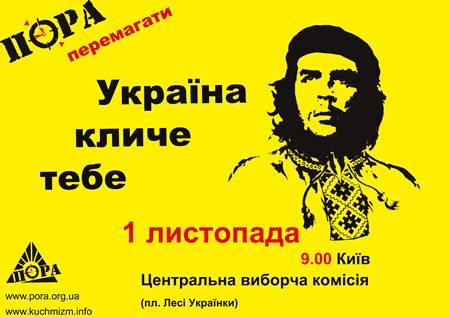 Pora Poster “It’s Time to Win”: The poster displays an image of Che Guevara in an embroidered Ukrainian shirt. Image courtesy of the author.

Some youth movements, however, were more successful than others in mobilizing youth against the regime. Adopting the clenched fist as a symbol of resistance, Otpor became popular with thousands of young people throughout the country. In contrast, Azerbaijani youth movements had a significantly smaller number of members by Election Day. Moreover, there were discernible differences among the countries in how youth voted for the political opposition. Public opinion polls indicate that only 27.2 percent of Belarusians between the ages of eighteen and twenty-nine, compared to 60.5 percent of young Ukrainians (during the second round of elections), cast a ballot for a single candidate from the opposition. Similarly, youth electoral support for the political opposition was higher in Georgia than in Azerbaijan.

In my recent book Youth Movements and Elections in Eastern Europe (2017), I argue that tactical interactions between youth movements and incumbent governments explain, in no small degree, differences in the level of youth mobilization among different countries. On the one hand, challenger organizations seek to deploy novel protest tactics to tip the balance of power in their favor. On the other hand, state authorities adopt countermovement tactics to suppress dissent. The level of youth mobilization is affected by the extent to which the social movement and its adversary deploy innovative tactics and counteract each other’s actions. The degree of political openness in a country, the opposition’s access to resources, and the development of social networks also affect the level of protest activity. Nonetheless, it requires resourcefulness to take full advantage of openings in the political system and effectively use available resources and preexisting social networks.

I single out three types of movement tactics: recruitment tactics targeted at the youth population, tactics vis-à-vis allies, and tactics vis-à-vis opponents. My analysis suggests that it is critical for youth movements to build a heterogeneous base of support and spread beyond the capital city. Moreover, youth movements need to assert independence from opposition political parties to enlist popular support. Compared to the old opposition, youth activists can inject a greater amount of creativity into civil resistance. In particular, Otpor was successful in applying marketing techniques to create a culture of resistance. As Otpor member Ivan Marovic put it, “Our product was dissent. Our message was Jive Otpor [“Live resistance”].… We wanted people to join us and live resistance, so we promoted revolution like a fashion line” (p. 116).

By the same token, I find that humor was a prominent feature of youth rebellion against the regime. Janjira Sombatpoonsiri's book Humor and Nonviolent Struggle in Serbia delves into the subversive use of humor by the Serbian youth movement Otpor. In my book I trace the use of humor across the five countries. While Serbs and Ukrainians used humor extensively to poke fun at the regime, Azerbaijani youth activists did not dare to ridicule the incumbent president during the 2005 elections. In one example, a Ukrainian youth activist whom I interviewed recalled how low-cost props were used to stage humor-infused street performances and overcome fear of state repression:

We organized a street action “Kuchma – to the Moon” in Kharkiv. In his book Ukraine Is Not Russia [2005], Kuchma promised that Ukrainians would fly to the Moon. And we decided to send him to the Moon in a washing machine. For this purpose, I borrowed from my mom the washing machine “Riga” that looked like a rocket. We also played the song “One-Way Ticket” by the British band Eruption (p. 190). 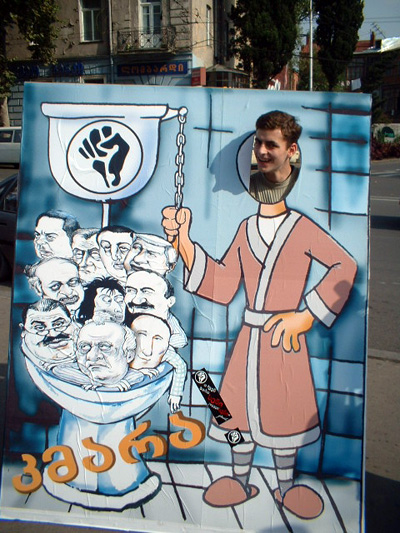 Kmara’s Street Action: Kmara activists organized a street action in which they provocatively stated that the ruling elite should be removed from power. Image courtesy of the author.

In addition, I distinguish between coercion, or the use of force, and channeling, a subtler form of repressive action “meant to affect the forms of protest available, the timing of protests, and/or flows of resources to movements” (p. 6). I also analyze state sponsorship of regime-friendly youth organizations as a form of state action directed against challenger organizations. Notably, President of Belarus Alyaksandar Lukashenka and President of Azerbaijan Ilham Aliyev selected different models of youth co-optation. Lukashenka adopted the Soviet-era Komsomol as a template for building a regime-friendly youth movement in the post-Soviet period. Meanwhile, taking a cue from Putin’s playbook, Aliyev modeled the youth movement Ireli (Forward) on Russia’s Nashi (Ours).

The mass media frequently depict protest events as spontaneous action of the disgruntled population, losing sight of the long-term struggle for social change in a country. Yet the confrontation between challenger organizations and the ruling elite is often an iterative process. As shown in the book, civic activists and state authorities might draw lessons from previous episodes of contention inside the country or benefit from the cross-national diffusion of ideas. For example, the defeat of the 2000-2001 Ukraine without Kuchma Movement, along with the Revolution on the Granite of October 1990, informed youth’s approach to civil resistance during the 2004 elections in Ukraine. A closer look at previous protest campaigns can deepen our understanding of state-movement interactions at a particular moment in the country’s history.

Youth Movements and Elections in Eastern Europe contributes to comparative politics literature by examining the development of nonviolent youth movements in five post-communist states: Azerbaijan, Belarus, Georgia, Serbia, and Ukraine. More recently, youth in the Middle East revolted against repressive governments. As shown in Ali Sonay's book, Making Revolution in Egypt: The April 6th Youth Movement in a Global Context, the April 6th Movement began as a Facebook group and recruited thousands of young people in favor of political change. Likewise, Zeynep Tufekci's book, Twitter and Tear Gas: The Power and Fragility of Networked Protest, demonstrates how the spread of technology and the development of new social networks facilitated youth mobilization in Istanbul in the summer of 2013. There is a growing recognition in the literature that digital connectivity and culture play a vital role in shaping the dynamics of contentious collective action. This book emphasizes the importance of tactics in explaining mass mobilization. A take-home message is that civic activists need to display a great deal of resourcefulness to outwit their adversaries and attain their goals. Olena Nikolayenko is associate professor of political science at Fordham University. She is also an associate at the Davis Center for Russian and Eurasian Studies, Harvard University. Nikolayenko received her PhD in political science from the University of Toronto and held visiting appointments at the Center on Democracy, Development, and the Rule of Law, Stanford University; the Princeton Institute for International and Regional Studies, Princeton University; and the Department of Sociology, the National University of Kyiv-Mohyla Academy, Ukraine. Her research interests include comparative democratization, social movements, political behavior, women's activism, and youth, with a regional focus on Eastern Europe, Russia, and Central Asia.